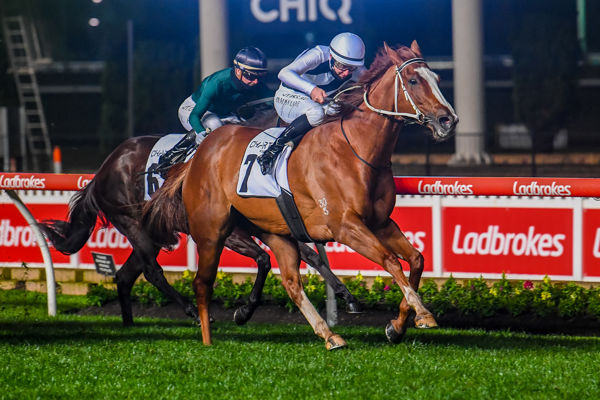 Quality sprinter Pippie secured a second career G1 with a lightning display of speed to win last night’s Moir Stakes at The Valley.

Having just her 12th career start – of which she has now won six for $1.2m in earnings – Pippie (Written Tycoon x Coupe Express) pounced to the lead and gave nothing else a chance, sprinting away from her rivals at the top of the straight to win comfortably.

Trainers John and Chris Meagher purchased Pippie for $60,000 at the Classic Yearling Sale, where she was offered by Eureka Stud, who also bred her.

Tonight’s was also her fourth win first-up from a spell from four attempts and the result came as no surprise to co-trainer Chris Meagher.

“I’ve said it before, it might be a touch arrogant but I don’t care what I run her in, I know she’s going to run enormous. Tonight, she was just on point, did everything right, we couldn’t have been happier, just over the moon,’’ Meagher said.

“She’s a dead set 10YO gelding at home but as soon as she bounces out of the machine, she’s a completely different animal.

“To win a race of this calibre is just a huge honour and I’m just wrapped for everyone involved. This was our main target and we’ve pulled it off.

“We know how fast she is and we know how she can sustain that speed. We came here as confident as you can be going into a Group 1 and to pull it off is just amazing.’’

On the $60,000 price tag they paid for Pippie, Meagher said: “It’s pretty cheap now, isn’t it. We were lucky enough to get her for a nice price and as they say, the rest is history.’’

Eureka’s Scott McAlpine, who purchased Pippie’s dam Coupe Express for just $26,000 at an Inglis Mixed Sale in 2015 in foal to Written Tycoon – carrying Pippie at the time of purchase – said:

“She’s just a ripper of a sprinter Pippie and the mother, well she’s turning into a very good buy for us now. She’s [Coupe Express] actually booked in to be covered with Written Tycoon next week so hopefully we’ll have a full brother or sister to Pippie on the ground next year.’’