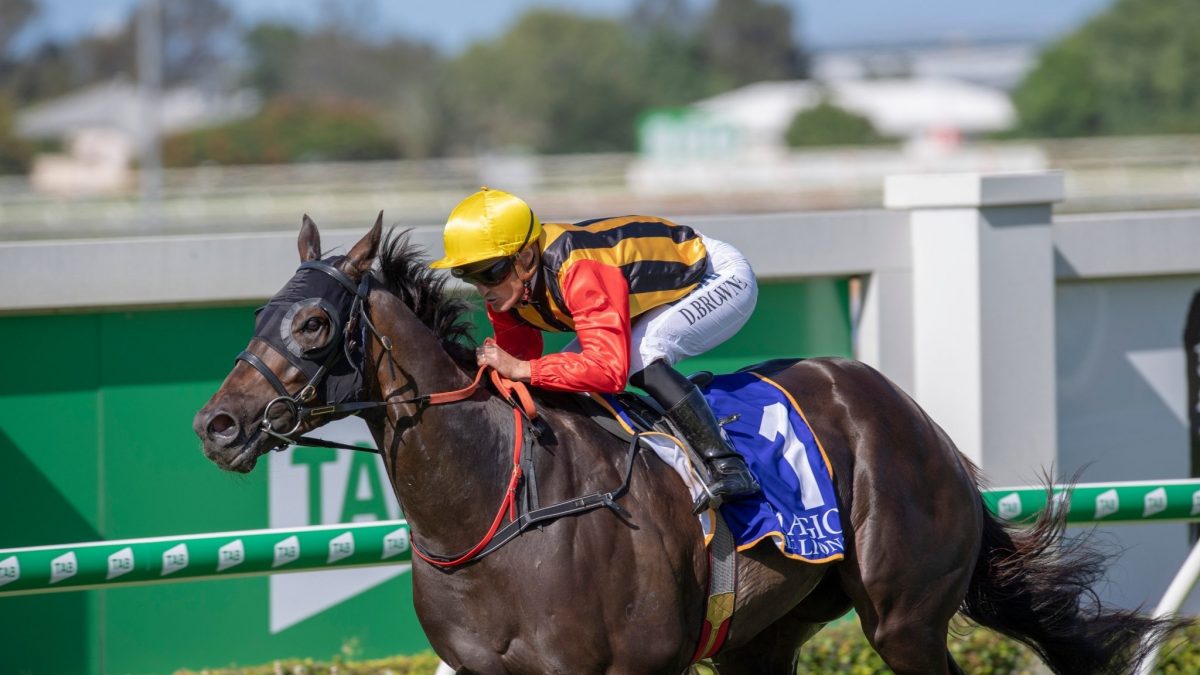 While the short-priced favourite Outback Barbie endured a horror run from her outside barrier in Saturday’s Group III Vo Rogue Plate (1350m) at Doomben, Boomsara was ridden along by Damian Browne to overcome barrier 12 and he kept up a relentless gallop to win by four and a half lengths.

It was the first stakes win for the 3yo son of Spirit Of Boom who, like his sire, sported the colours of the McAlpine family’s Eureka Stud.

The Chris Munce-trained gelding defeated Pennino (Easy Rocking) by four and a half lengths with Light Up the Room (So You Think) a short-head back in third.
Twice a winner at the Gold Coast last season, Boomsara advances his record to 3 wins, 2 seconds and 1 third from 9 starts with earnings of $361,400.

“Our intention was to go forward and I had to do a ton of work to get there, but he gave me a good kick on the corner so full credit to Chris and the team,” Browne said.

“He’s been racing against Zoustyle and some of the better horses so it’s good for him to get a turn.

“Chris has had a good opinion of this horse for a long time and it’s good he is getting the rewards now.”

Munce said it was now all systems go for the Magic Millions 3yo Classic at the Gold Coast.

“He did a lot of hard work and to sustain that gallop the trip, with a month between runs, it’s a credit to the horse, his stamina and his ability,” Munce said.

“It’s easy to train good horses, you’ve just got to keep them happy and healthy and they will turn up on race day and do their best for you.

“He was pretty close to the mark today but I’ve still got a bit left up my sleeve for Magic Millions day and he” go there a fit, happy and healthy horse.”

A $45,000 purchase by his trainer out of the Eureka Stud draft at the 2017 Gold Coast March Yearling Sale, Boomsara is a half-sister to three winners including the stakes-placed Sarisara (Red Dazzler).

Passara foaled a colt by Defcon on October 8.