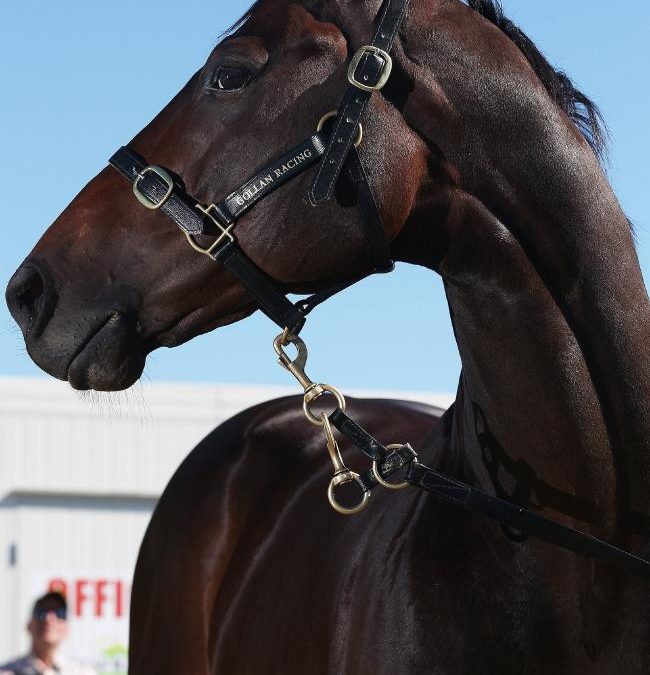 With Jonker’s Wyong win on Thursday, Spirit Of Boom has ­already had three stakes winners, only three months into the new two-year-old season in a blistering start to his stud career.

“There’s no doubt he’s created a huge impression. Every second person I speak to wants to talk about Spirit Of Boom,” Bowditch said.

“The general consensus from most buyers is that they missed the boat last year and are probably going to have to pay a premium this time around.

“What this early start has done is put them into the next bracket.

“Whereas he was probably a syndicator-type horse before this, he is now commanding the attention of breeders and some of the big stallion-buying syndicates.

“People are genuinely excited about him and most of that is coming from outside the state.

“We’re fielding bookings from Victorian trainers about the March Sale (where Magic Millions will have as many as 45 Spirit Of Boom yearlings to sell).”

Spirit Of Boom’s yearlings averaged $40,600 for the 48 that were sold in the Magic Millions Gold Coast ring at January, March and June sales last year.

That figure is sure to escalate next month, with the stallion being in the box seat to sire the Magic Millions winner, with Jonker and Ef Troop dominating the market.

Eureka Stud’s Scott McAlpine had to take a $1.2 million punt on securing Spirit Of Boom for the family farm and he and fellow shareholders are poised to reap huge dividends.

“I’m blown away. It’s taken me by surprise for this to happen so early,” McAlpine said.

“He’s doing it off a base of mares that are, to be fair, probably only middle of the road.”

“I’m fielding a huge amount of inquiries. It might get to the stage where we have to be a little more selective next year,” he said.

McAlpine laughs at the suggestion Spirit Of Boom’s youngsters will skyrocket in value at next month’s Magic Millions sale.

“I’m not sure it will increase as much as everyone thinks,” he said.

“There will be a couple that will go better than we anticipate, but I think what the start he’s had will do is ensure they all get sold and we’re not taking them home.”

Spirit Of Boom failed to add to his winning tally yesterday, but Boom Girl turned in a promising effort to run third on debut after having no luck in the run.

Sunlight has been stabled with Gollan at Eagle Farm, so he’s had plenty of time to assess her.

He doesn’t think there’s a lot between that pair, but he regards Ef Troop as being a bit special.

That assessment is backed up by ratings gurus, who have marked Ef Troop’s last-start win through the roof.

Daniel O’Sullivan, of BetSmart Racing, assessed it as the highest-rating pre-Christmas run by a two-year-old in the past three years.

Ef Troop, who has spent the past week on a farm out of the stable, will again be ridden by Matt McGillivray in the Millions.

TRAINER Brian Smith rang jockey Jim Byrne six weeks ago to book him for the ride on Feltre in the Magic Millions Stayers (2200m) and the move looks on target after Feltre’s return to winning form.

Smith said Feltre was going better this campaign than last.

The horse just missed in a narrow finish when the race was run at 1800m two years ago.

KELSO Wood had a wry smile as the well-backed Criquette returned to the winners’ enclosure at the Gold Coast.

The mare posted a slick 1min 8.87 sec leading throughout for the 1200m trip after being backed from $7 to $5 in betting.

Asked if he was referring to the 26 months between Criquette’s Saturday metropolitan successes, Wood clarified: “No. A long time between bloody winners!”

Wood and trainer partner Patricia Gesler last tasted success at the Sunshine Coast in October, but had only had another 10 runners since, before Criquette lobbed yesterday.

Criquette was regarded as the leading two-year-old in Queensland after winning on debut at Doomben in October 2015, but injury meant she did not race again for another 560 days.

She won twice at midweek level last time in, before being a beaten favourite at Doomben first-up this time around.

“She came out a bit slow and that put her on the wrong leg that day,” Wood said. “I thought the run was good.”

Prue’s Angel loomed as a danger inside the 200m point, but under Adam Sewell, Criquette kept going strongly to the line in the familiar colours of prominent owner David Devine.

Winning backers had to take deductions after the late scratchings of Sharpamal and Rock On Destiny in a race that ran several minutes late.