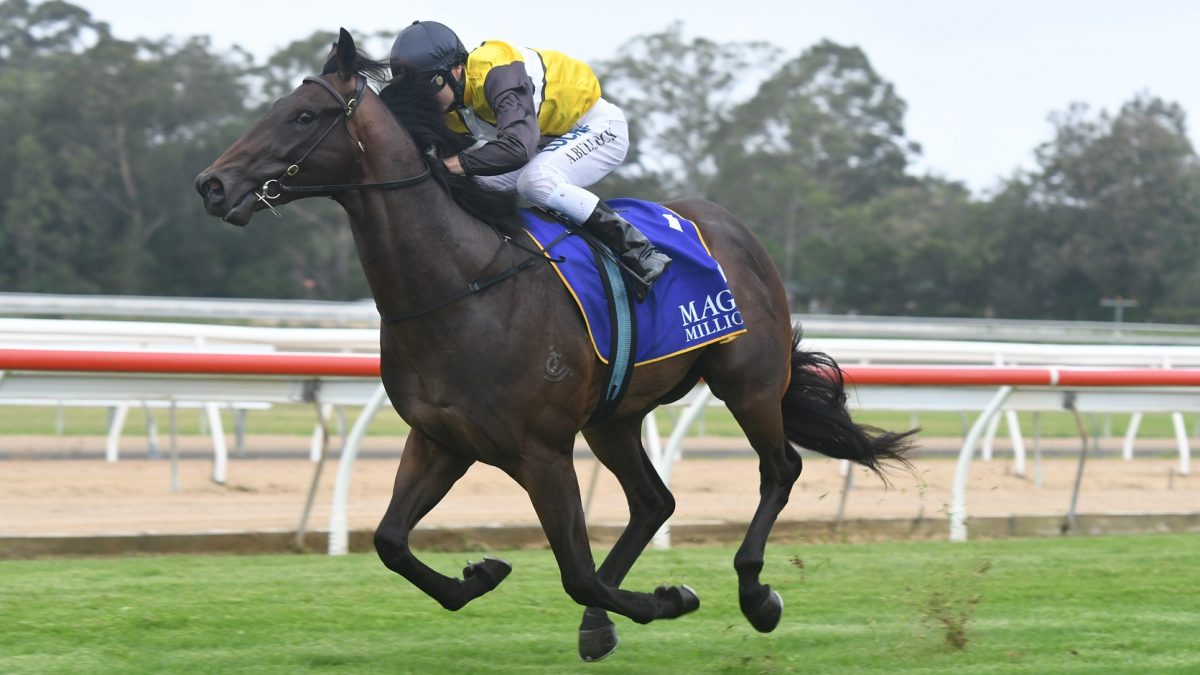 One of the most intriguing questions floating around the thoroughbred world, as the 2018 yearling sales circuit enters it first round this week, is the one concerning the young stallion Spirit Of Boom.

Can he finish what he has started?

Doubtless the Eureka Stud at Cambooya, Queensland, where Spirit Of Boom resides — indeed, where he was bred — will be looking to that finish line being many, many fruitful seasons down the track for that question to be completely answered.

The 2017-18 racing season, which opened on August 1, is just over five months old but critical to that period is the three months — October through to December — in which the new season’s two-year-olds strut their stuff.

The yearling market in Australia is a massive, multimillion-dollar force. But it is a fickle one, a demanding one and savagely swift to condemn a stallion not stepping up to the mark — and with emphasis on the young stallion with his first crop of runners on the track.

Spirit Of Boom has his first runners this season and in those critical three months he has started something that may not have been documented since the early days of the magnificent Star Kingdom, five times a champion stallion in Australia, in the 1950s.

As of racing after Saturday, Spirit Of Boom has the exceedingly rare distinction of sitting at the top of the ladder in the category of leading sires of two-year-olds, a spot which has him automatically as the leading first-season sire as well.

On the sires’ listings for two-year-olds, Spirit Of Boom is credited with seven individual winners from 18 starters and with progeny earnings of $500,060.

And they are followed by Choisir (with eight runners two winners), Exceed And Excel (17 runners, three winners), I Am Invincible (17 runners and two winners) and 2016-17 first-season leader Pierro with two inners from 11 runners.

Spirit Of Boom is the only first-season sire with double-digit runners but that, too, can be read as a positive factor to the yearling market which is very one-eyed to precocity. And it is also ever so helpful that almost one third of the group are already winners and, for the markers of elite racing, with three of them stakeswinners.

Compare Spirit Of Boom’s figures for just three months against the top three first-season sires for 2016-17, Pierro, All Too Hard and Your Song, with 28 individual winners between them for the full season and a total of three stakeswinners.

When Smart Missile topped the first-season ladder from Love Conquers All and Dream Ahead in 2015-16 — the trio collectively had 19 winners, but not a single stakeswinner among them. I Am Invincible’s first crop of runners in 2013-14 included 15 individual winners with three stakeswinners.

Spirit Of Boom’s first three stakeswinners, Jonker, Ef Troop and Outback Barbie will seek to snare the lion’s share of the $2 million prize offered for the Magic Millions Classic (1200m) on the Gold Coast on Saturday.

Jonker is the ruling $4 favourite after two unbeaten starts, the most recent when posting a four-length margin in the $200,000 Wyong Magic Millions Classic — a race from which Capitalist, Unencumbered and Karuta Queen rebounded to win the Gold Coast’s MM Classic.

Ef Troop, the $4.50 equal second elect, is also the winner of his two starts and looking rather special with a runaway win in the Listed Phelan Ready Stakes (1110m) at Doomben on December 16 — and with stablemate Outback Barbie ($16) a tidy debut winner in the Listed Calaway Gal Stakes (1110m) on the same program.

Jonker, Ef Troop and Outback Barbie are three of 121 live foals from Spirit’s Of Boom’s first stud season, having entered Eureka Stud in 2014 on a service fee of $11,000. Spirit Of Boom’s fee has remained unchanged, nor has his popularity with broodmare owners. According to the Australian Stud Book, he covered 154 mares in his first year, 147 in 2015, 146 in 2016 and 164 in the past spring season. He will most likely be a double century achiever for the 2018 spring but with his fee increased at least threefold.

Members of 112 live foals from Spirit Of Boom’s second crop step out at this week’s Magic Millions Gold Coast extravaganza — a five-day auction with a record 1062 yearlings listed and highlighted by a five-session schedule, Wednesday through to Saturday evening — comprising 853 lots in the select Book One catalogue.

Spirit Of Boom has but three yearlings in Book One, all colts headed by a half-brother to the Eureka Stud-bred Tinto which won the 2014 Group I Queensland Oaks one week after Spirit Of Boom claimed the Group I Doomben 10,000 — defeating his Eureka-bred half-brother Temple Of Boom in a photo-finish.

There are eight Spirit Of Booms listed for sale in Sunday’s Book Two catalogue and they include the full brother to the unbeaten Ef Troop who was bought for $70,000 by trainer Tony Gollan (who prepared Spirit Of Boom in a $2.14m career) on the corresponding day in 2017.

Overall, Spirit Of Boom had 67 yearlings to the market in 2017 and they fetched an average $39,037, or better than three times his initial service fee.

He cannot help but improve drastically by average between Wednesday and Sunday evening.