Half-brother by Spirit Boom to Turbulent Air sell in 2017 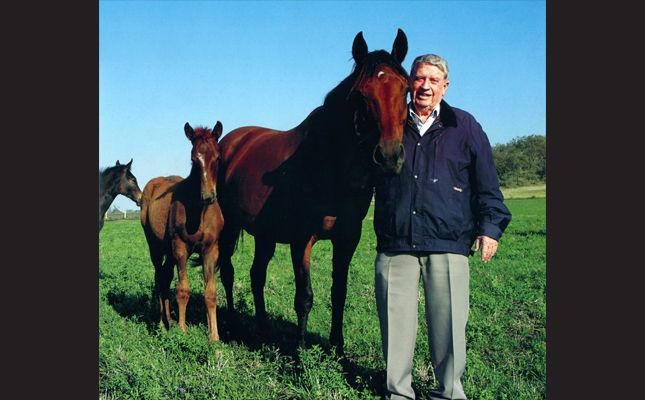 The Australian thoroughbred industry has lost a truly remarkable figure with the passing of Colin McAlpine.

Born and raised in Queensland’s Darling Downs, McAlpine commenced working for the family-owned, Eureka Stud, at Cambooya straight out of school, but ‘work’ doesn’t quite cut it. For McAlpine, horses were much, much more than something you do from 9 to 5.

Untiring in his advocacy for the Australian-bred horse, McAlpine was a breeder, owner and keen punter, and saw – from very early on – the advantages of introducing northern hemisphere bloodlines to enhance domestic pedigrees. Indeed, in the mid 60s, McAlpine was one of the first Australians – in tandem with legendary trainer Colin Hayes – to regularly attend sales in Europe and North America, developing associations with people across all spectrums of global breeding and racing. His friendships extended from knights, to the bloke who sold the pies.

Throughout the years, McAlpine imported a string of well bred stallions to Queensland – Lumley Road (sire of Champion Stayer, Grey Affair), Piccolo and Puissance among them, but probably most notable was the highly prolific, Semipalatinsk, who, as McAlpine proudly pointed out, produced winners from 800m to 3200m, and is the bedrock of numerous outstanding Eureka families. Somewhat fittingly, Semipalatinsk features in the pedigree of half-brothers and home-bred Group One winners, Spirit of Boom and Temple of Boom, the latter now carrying on the Eureka name as a resident stallion.

The ‘Boom boys’ aside, Eureka has also produced Group One winners such as Champion filly, Just Now, Picaday, Scenic Peak, Show of Heart, Tinto and Skalato.

“He was one of my father’s best friends and a true racing man,” Hayes reminisced. “Colin was around for, well, as long as I can remember. He had a lot of very good horses over the years … the families are very close and indeed, his daughter Jenny has worked for me for a long time.

“Colin lived and breathed racing – back in the days before mobile phones, the phone would ring at 7.30 on a Saturday morning and it would be Colin on the phone, followed by Bob Hawke, wanting to discuss the afternoon’s racing,” Hayes said with a laugh.

“He was a real raconteur – he loved life.”

Despite his many achievements as a breeder and owner, McAlpine – however – will long be remembered for his services to the thoroughbred industry as a visionary administrator.

It was in that role McAlpine oversaw the introduction of generous tax concessions to Australian breeders which put his country on a level playing field and largely heralded the commencement of the stallion shuttle era.

Furthermore, McAlpine was a life member of the Thoroughbred Breeders Queensland, the Tattersall’s Racing Club, the Toowoomba Royal Agricultural Society and the Bernborough Club. In 1991 he was awarded a Member of the Order of Australia (AM) for his contribution to the Australian Thoroughbred Industry and its promotion throughout the world.

This is an astonishing legacy of service for someone who, until recent years, was still very much involved in the day-to-day activities of his beloved Eureka.

“Colin was one of the most influential breeders in Queensland for many years,” Thoroughbred Breeders Australia Chairman and fellow Queenslander, Basil Nolan, points out. “I had had the privilege of working with Colin on a number of Committees for quite a few decades and his dedication and passion for the industry was second to none.

“Not only was he a fine horseman and breeding entrepreneur, but he was a true gentleman and well respected in the industry … not just in Australia, but world-wide.

“I have no doubt that the Queensland breeding and racing industry prospered on the back of Colin’s vision.”

Rest In Peace at Eureka