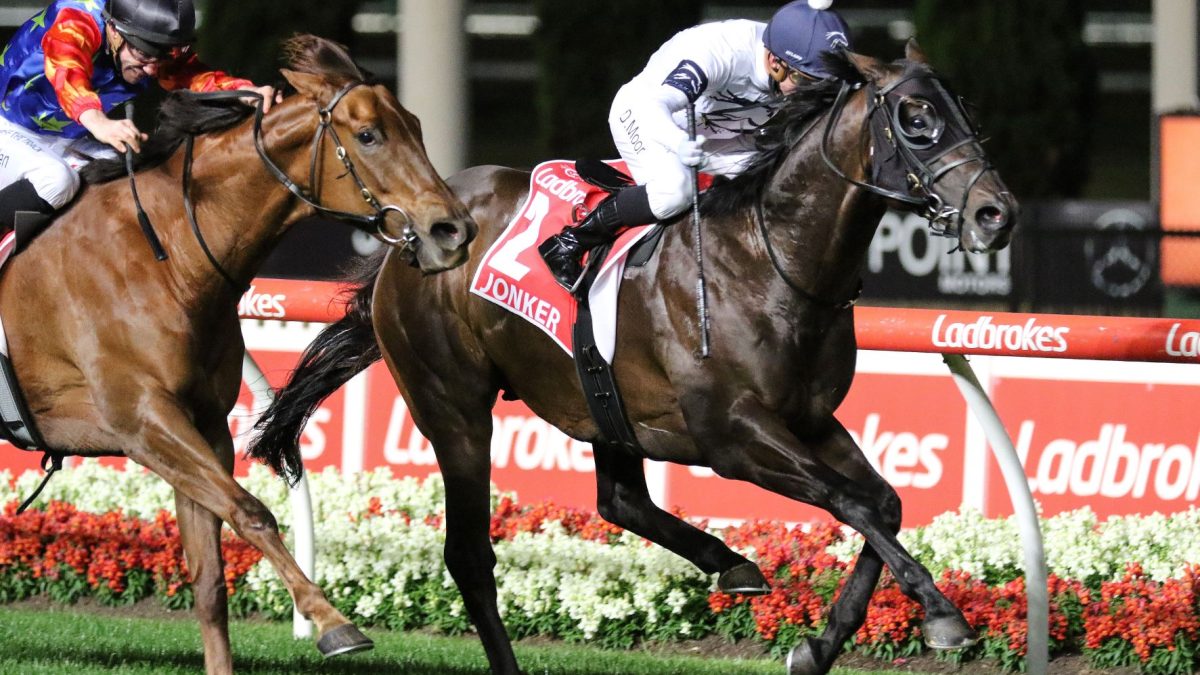 A third Group 1 of the spring for Daniel Moor as the six-year-old Spirit Of Boom entire Jonker made all the running in Friday night’s Group 1 Ladbrokes Manikato Stakes (1200m) at Moonee Valley. Trained by Tony Gollan, Jonker held off the fast-finishing Pride Of Dubai mare Bella Nipotina by a short-head with the three-year-old Frosted (USA) colt Ingratiating a further two and a quarter lengths back in third.

Jonker has covered plenty of ground up and down the east coast of Australia this year. It began with a win in the $1million Magic Millions Sprint at the Gold Coast in January before placing the Group 1 The Galaxy at Rosehill and the Group 1 Kingsford Smith Cup at Eagle Farm in May. Following a spell, the son of Spirit Of Boom finished midfield in the Group II Bobbie Lewis Quality at Flemington on September 9 before prepping for the Manikato with a troubled sixth in the Group II Premier Stakes at Randwick won by Masked Crusader.

With his Group 1 breakthrough, Jonker advances his record to five wins, three seconds, and five thirds from 28 starts with earnings of 2,065,660.

Stable representative Andrew Angleone said Jonker was primed for the race. “He galloped quite well on the Saturday and he looks fantastic, and I wasn’t surprised that he ran so well,” Angleone said. “He’s probably one of the most laid-back colts I’ve ever seen. He’s just so relaxed. He’s great to deal with and Tony Gollan does such a good job with him. “He got the Group 1 win tonight, so they’ll all be celebrating, I’m sure.”

Moor pointed out that Jonker has raced without luck at his past few starts. “This horse gave me a very similar feel to Wild Ruler and his track work here alone last week,” Moor said. “He’s just a lovely gentleman of a horse, he’s had no luck all prep and I’m just really pleased to get the job done again. Jye (McNeil) on my inside was kicking up on Lombardo and I knew it was going to be there, but I also knew I had the horse to absorb that sort of pressure early. Down the side we backed it off nice enough, just where he came back underneath me and had enough kick in the locker. “He floated a little. He wasn’t quite as sharp as what we would have hoped. He loaded up a little awkward, but once we got around the bend, he extended nicely.”

Bred by Wicklow Lodge, Jonker was a $45,000 purchase by Doug Crich from the Fig Tree Thoroughbreds draft at session two of the Magic Millions Gold Coast Yearling Sale. He is the best of winners from as many to race out of the winning Kempinsky mare Hearts And Arrows who is a half-sister to the Group III CS Hayes winner Fair Trade and triple Group III winner and Group 1 placed Fiscal Fantasy. From the incomparable Eight Carat family on both sides of her pedigree, Heart And Arrows has a 2yo sister to Jonker named Culasse and foaled another Spirit Of Boom filly on August 24.

Jonker becomes the first Group 1 winner for Eureka Stud’s Spirit Of Boom, who stands for a fee of $33,000 this spring.