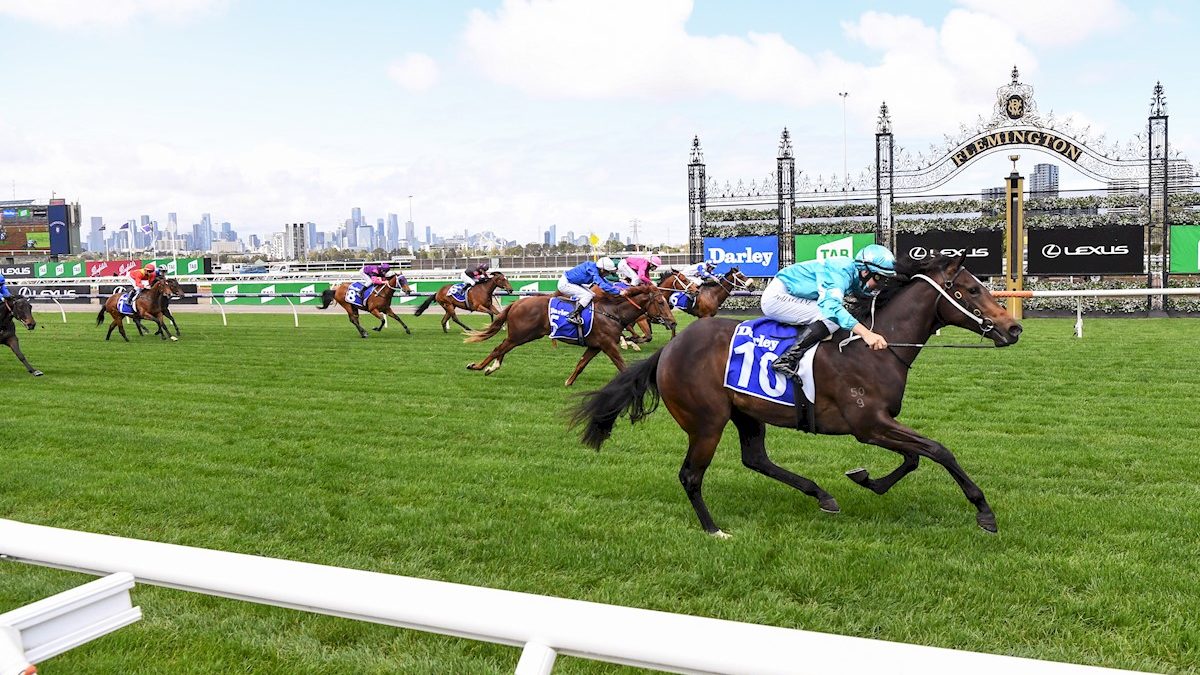 Mick Price and Michael Kent Jnr have trained the winners of the two two-year-old races in Melbourne this season, the latest being the Spirit of Boom filly Get In The Spirit, who showed a clean pair of heels in Saturday’s Listed Darley Maribyrnong Trial Stakes (1000m) at Flemington. Marking virtually all the running on her own down the outside fence, Get In The Spirit defeated Alizee’s three-quarter brother Lascars (Sepoy) by two lengths with the Frankel (GB) colt Rampant Lion a neck back in third ahead of the favoured Churchill (IRE) colt Robusto.

“I think she is a very smart filly. She has trialled well and has never given us a moment of temperament or physical worry,” Mick Price said. “I’m very happy for Bill Frost because he has a big go in our stable and sometimes they don’t all come off. It’s a family affair for him and that part of it is very pleasing.
I know she’s a Magic Millions filly, but you’re trying to win a Group 1 with these fillies. I know it is difficult for a Victorian horse to use all your energy in a Magic Millions, albeit at $2 million, but there’s a Blue Diamond and a Golden Slipper, so what can you do? “My advice would be to aim for a Blue Diamond and a Slipper. And I’d spell her with regard to that. That’s my first thought, but we do get a few different opinions in this game.”

Winning rider Damian Lane said he was happy to head to the outside fence.

“I knew where I wanted to be and it’s not always an easy decision to make that on a two-year-old.” Lane said. “The easy option is to go down to the fence and have something to follow, but she’s so professional that I was confident she would handle it well, and she did. She just had a little look at the mounting yard here when I went past and had to get her mind back on the job. But she had a bit in hand. “She’s very quick, and quick through those middle stages, which is going to win her a lot of races.”

Bred by Simon Engelbrecht, Get In The Spirit was purchased by the Pendant Equine Syndicate for $110,000 out of the Kitchwin Hills draft at the Magic Millions Gold Coast Yearling Sale. She is the fourth winner from as many foals of the Exceed And Excel mare Sopraffina. The winner of little more than a Kempsey maiden in 19 starts, Sopraffina was sold for just $2,000 at the 2014 Inglis Australian Broodmare and Weanling Sale. A half-sister to stakes-winner Green Roller (Flying Spur) and to the dam of Group 1 New Zealand Two Thousand Guineas winner Ugo Foscolo (Zacinto), Sopraffina was purchased by Westbury Stud for $135,000 at the 2019 National Broodmare Sale when carrying the Maribyrnong Trial Stakes winner.