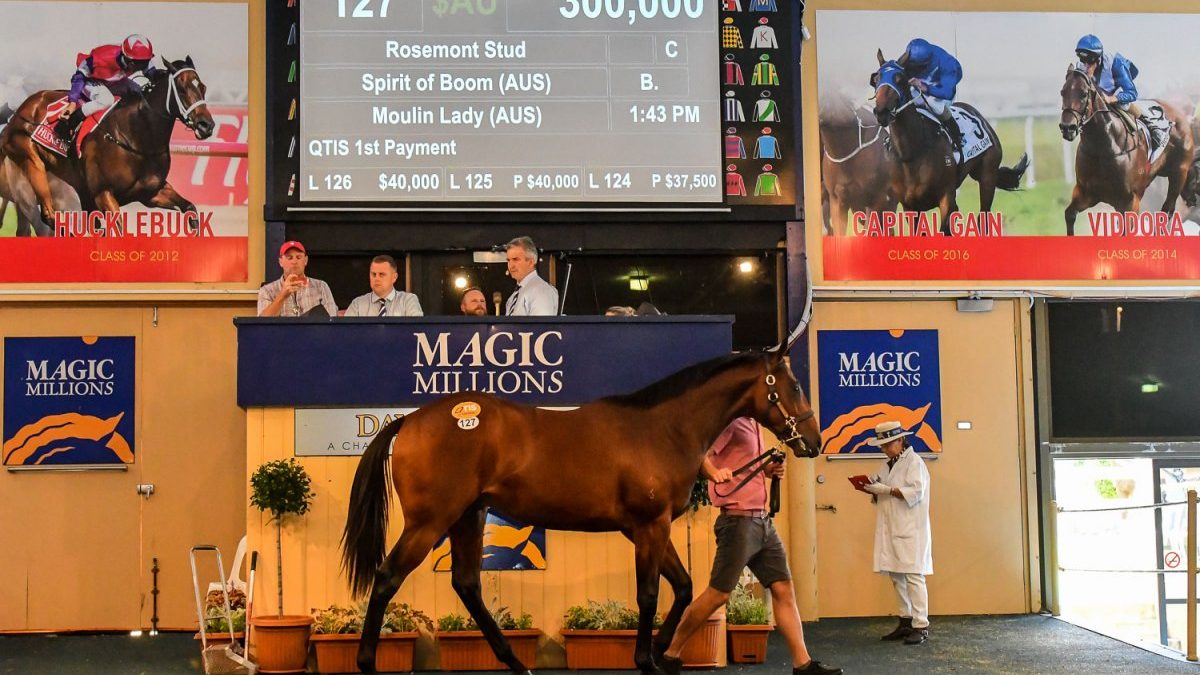 A colt by Australia’s first season sire sensation Spirit of Boom topped a healthy opening day at the 2018 Magic Millions Adelaide Yearling Sale at Morphettville today.
Presented as Lot 127 by Rosemont Stud the colt was sold to Yulong Investments for $300,000 after a fierce bidding duel with leading Perth based bloodstock agent John Chalmers.

“He was short listed by Mr Zhang,” Yulong’s Eric Koh said. “We were looking for a nice yearling by Spirit of Boom – the up and coming sire.”

“This lot really caught our eye and Mr Zhang really likes him – he was determined to get him.”

“There’s a lot of hype about him (Spirit of Boom) and we think he’s producing really good types and we wanted to buy one.”

Rosemont Stud’s Anthony Mithen said the result was almost unprecedented – a massive pin hook success. The colt was purchased as a weanling for $10,000 on the Gold Coast.

“It’s a great result for good clients of ours Crown Park Thoroughbreds, who do a bit of dabbling on low end weanlings – trying to pin hook a few for a profit and they’ve done a great job here – $10,000 into $300,000.”

The team from Yulong were back in the action later in the afternoon when they went to $210,000 to secure the day’s second top seller, the Nicconi-Sparkle Arkle colt from first time Adelaide sellers Princess Park Thoroughbred Farm.

The top priced filly of the day was Lot 11 – the Spirit of Boom filly from Done Deal who was sold for $125,000 to Lloyd Kennewell from the Eureka Stud and Cornerstone Stud Partnership.