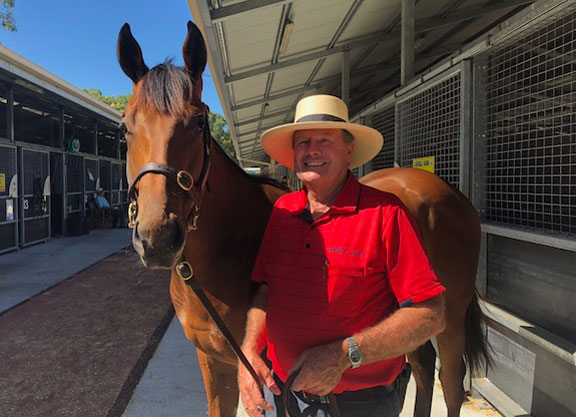 Just as he had done on opening day, Queensland’s first-season sire sensationSpirit of Boom (Aus) dominated the second and final session of the Magic Millions Gold Coast March Yearling Sale on Tuesday. Spirit of Boom had provided the top 10 lots on Monday and 19 of the top 23, and on Tuesday he was responsible for the top eight and 14 of the top 20.

Scott McAlpine, who stands his homebred Spirit of Boom at his Eureka Stud, said, “This QTIS sale in Queensland has been quite remarkable, unbelievable. It was quite unexpected, to be honest. It’s been fantastic to see so many of our long time friends and clients across Queensland celebrating record results at this sale–it is a great reward for supporting Spirit of Boom. The amount of runners and winners and stakes horses for this horse–he’s doing something that’s quite unbelievable. The [Golden] Slipper is on Saturday and Ef Troop has drawn two and if he can be lucky enough to finish in the first three we would be over the moon.”

Among the buyers of Spirit of Boom’s progeny on Tuesday were John Singleton’s Strawberry Hill Stud, James Harron, leading trainer Darren Weir and Boomer Bloodstock’s Craig Rounsefell, who bought two including the record-breaking, sale-topping filly (lot 384) for A$430,000. Rounsefell bought both that filly and a A$300,000 filly (lot 338) with trainer Tony Gollan, who trains the aforementioned Ef Troop and another Spirit of Boom stakes winner, Outback Barbie (Aus).

“Tony Gollan and I were obviously targeting the Spirit of Booms,” Rounsefell said. Of the sale topper, he added, “She’s a filly from a young mare who’s already produced a stakes winner. It’s obviously a lot of money but my clients were pretty determined to get her and we gave it our best shot.”

The highest-priced colt on the day was James Harron’s purchase, a A$225,000 son of Spirit of Boom out of the four-time winner County Commands (Aus) (Commands {Aus}) (lot 308).

“Spirit of Boom has helped take this sale to a new level and it’s great to see so many Queensland breeders enjoying this success,” Bowditch added. “It’s been life changing here today. Some smaller breeders have been supporting this sale for a long time and to see them get the results they did was phenomenal. The gross is up over $5 million on last year, over 60%, and the average price is up 59% on last year. It’s great to be able to continue the trend of the Magic Millions Yearling Sales this year, which have all had significant increases.”